It’s been a while, shamefully, since I updated the handful of faithful on the status of Fox Plot.  I have excuses, the lame kind that are generic and generally sound like “I’ve been so busy!”.  As reigning queen of the part-time jobs, I can’t so much pick and choose when I have too much to do and when I don’t have enough.  My self-appointed job of backyard farmer has not been entirely neglected, even if I haven’t gotten around to writing about it. Below you’ll see me modeling* me new overalls, which may detract from my credibility. Nothing says greenhorn like brand new work clothes.  In my defense, my old overalls are in sad shape and my efforts to find Carhartt pants have failed. After trying on pairs in men’s, women’s, and youth sizes, I gave up on pants and bought overalls. 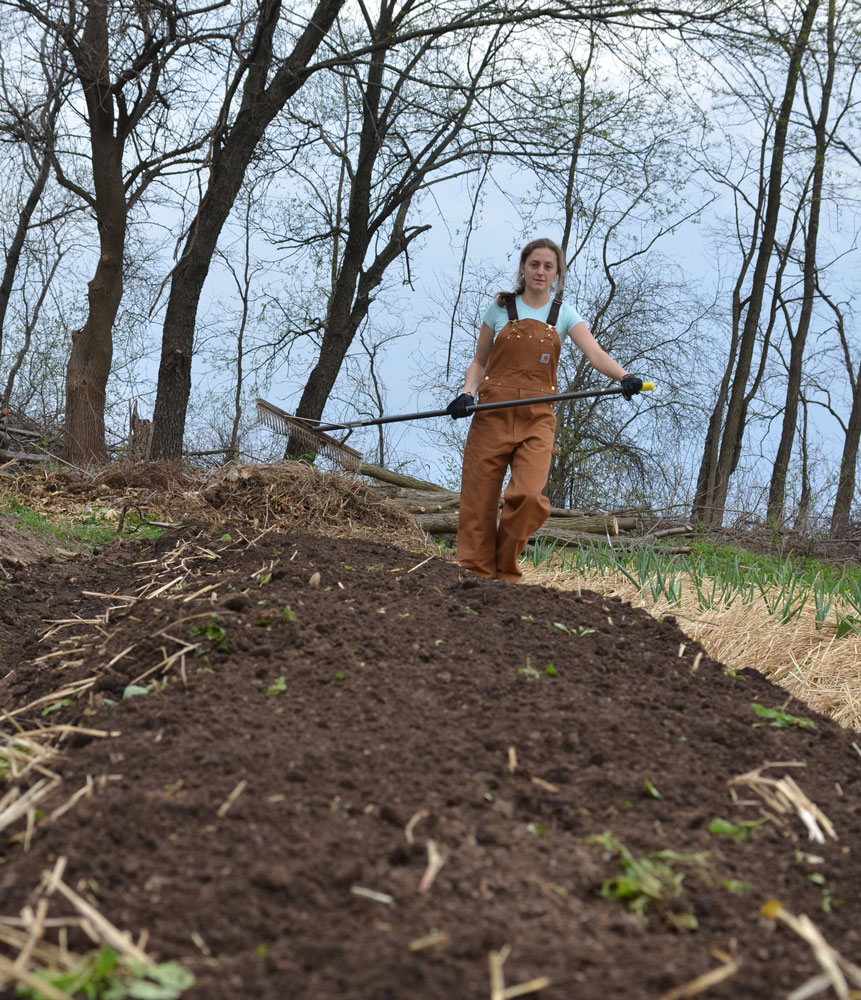 It’s finally spring in the garden, and by that I mean it’s been appropriately chilly, moderate thunderstorms, and even a smattering of hail. The garden is really beginning to take shape, and I feel a certain growing excitement as more than just the garlic is now growing.  Nate shoveled and dumped load after load of compost into about 10 of the rows, then followed by tilling. 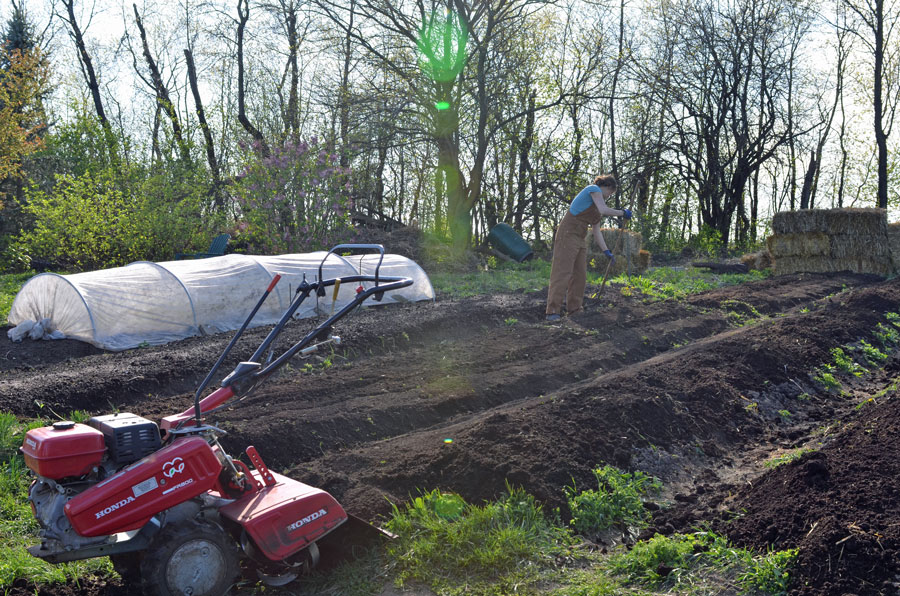 I discovered that I miscounted sometime last fall- there is one more row in the back of the garden than I thought previously, which means I can plant 1/34th more than I planned! Our garden consists of 34 raised beds or rows that are each 4 feet wide and 25 feet long, give or take. We rake the rows smooth, with a bit of reshaping to keep them as close to a consistent width.  Using a single row seeder, I planted one full row of carrots, one half row of radishes and one half row of turnips.  These root vegetables are seeded somewhat close, with six or more rows wide in each 4′ row.  The radishes seeds seem to have jammed up the seeder at some point, because there are big gaps where I thought I seeded.   I’ve added a 6 row seeder to my life long garden wish-list, after I nearly pitched a fit trying to convince the one row seeder to work properly.

The bees remain very busy, especially given the sunny warm weather we’ve had, and all of the blossoming plants.  I fed them once, but don’t think they’ll need it again. In a few days, we’ll do a hive check and I am hoping to add a super to each (the layer of the hive where they store honey).  We also dismantled most of the bee bunker, as it is plenty warm out now for them.  A few feet in front of the hive, we placed a stack of straw bales, to keep the bees from flying straight in across the garden.  It’s really hard to plant kale whilst standing in the beeline- my fuzzy hair seems to be both invisible and entrapping to them. The new bees finally have an arrival date of two weeks from now.  We’ll drive down (or some subset of the beekeeping collective) to Long Lane Honey Bee Farm and bring those little bees home (cue the music, I’m bringing home a baby honeybee, won’t my mommy be so proud of me…).  Long Lane, if I haven’t already said this, has a great blog and courses too, for those in the area, if you are interested in keeping hives yourself. 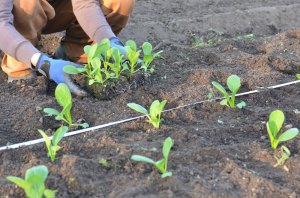 Some of the starts that have been growing up in the greenhouse are coming home to grow too already!  So far, I’ve transplanted 2/3 of a row of Napa cabbage (which grows faster than green or red cabbages), 1/4 row of komotsuna (I think), one row of kale (three varieties!) and one row of cabbage, mostly savoy.  It was at that point that we ran out of daylight and time really.  The hail came just after the first round of starts were successfully transplanted into the garden. Then the garden was too wet to plant before we left for my next excuse.

My final excuse is that we’re in Florida, again.  I feel almost silly about it, but maintain a seize the day attitude.  The flyboy doesn’t choose where he goes, but getting stuck in Florida for four days isn’t nearly as bad as somewhere like Erie, Pennsylvania in winter-time. Better still when he can drag me along!  For him, it’s work, for me, it’s vacation.  We’ll just summarize and call it a working vacation, where the destination chooses us (rather than the other way around).  As previously mentioned, trips like these can be good for a body. We checked out a farmer’s market this morning, which I found lovely local fruits like chocolate pudding fruits, canistels, sopadillas, mamey sapotes, and other tropical fruits that never make it to grocery stores up north.

I also saw Hakueri turnips, watermelon radishes, and sungold tomatoes, all things we grow too but just not now.  Their market season is coming to a close, while ours won’t begin until the end of May! Today we are headed to a more conventional tourist attraction, the beach, where we will work on some pre-garden season tanning, a technique for sunburn prevention.  I also want to give a thank you shout out to Kim, Tom, and Nan, whom are taking care of our wee vegetable starts and and garden whilst we bask in the southern sunshine.  We couldn’t do it without them!

*Nate, a fellow of many talents, gets photo credit for at least 51% of these shots, particularly actions shots that I’m in.

5 thoughts on “Excuses and more excuses”