My alarm sounded at 4:18am.  Just five more minutes.  Why was I getting up this early?  I peeled one lid open and stopped the noise, and searched for my glasses.  I looked at my phone again, and remembered.  Time to pick the radishes. 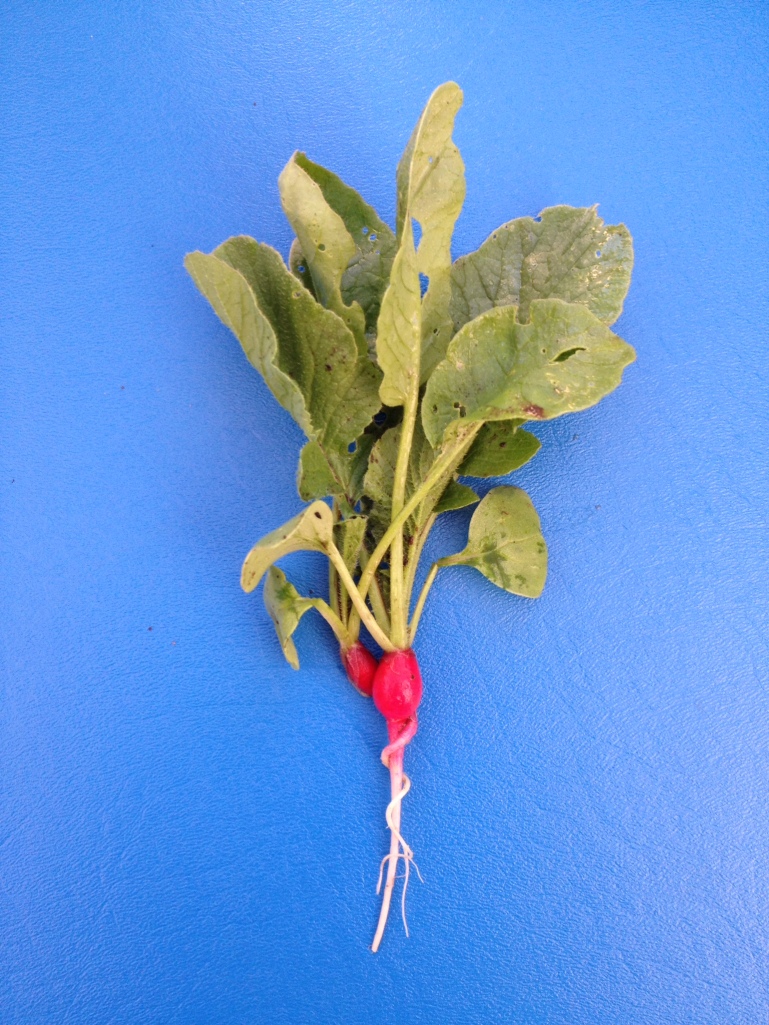 And just like the that, farmers market season has begun.  The last time I’d assembled all the stuff (the tent, coolers, tables, bags, scale, rubber bands, dry erase board, tablecloths, and don’t forget the honey!) was maybe August 2012.  That was followed by an August wedding celebration, a fall baby, and a move seven months after that.  I’m still catching my breath. Because we had moved during peak planting season and seven month olds aren’t especially independent, we took a break.  We grew some fennel, beets, garlic, and tomatoes.  Even then, I am certain the ground squirrels and other vermin ate more of it that we did.

This spring, we were itching to put our hands in the dirt and make this garden grow. We added a little hoop house, thanks to the help of fellow farmer and friend Carlos, that was finished by mid April.  In no time, little sprouts grew to kales, broccoli, asian greens, and lettuces.  The pepper, tomato, eggplant, and fennel starts followed.

Today, I took the first harvest of radishes and kale, a few jars of honey harvest last last fall, rhubarb stalks from my folks backyard, and several flats of basil, dill, and lettuce plants that some weeks ago. I packed up our car with the tables, tent, the cooler, one bin of radishes, and all those other market essentials. After such a year off of market, it was delightful to see and catch up with the old and new vendors. At least ten people asked, “How’s that baby?” and new customers asked where we were located, or why hadn’t they heard of us before? It felt sweet and comfortable, so familiar and I had missed it.  While I love my kid to pieces and know she’ll only be little for a few short years, I miss doing things that I personally feel excited and passionate about. Being back at market reminded me of that, I came home to me, the me that plants, tends, and harvests and is individual within a community.

We don’t need to mention that if I were paying myself this time, I would have made perhaps .50 an hour, after expenses  (not including the expense of buying a half flat of strawberries, a piece of cheese, a baguette and a chocolate croissant.)