Even after such a mild winter, I am guilty of complaining just a week ago that I was ready for warmer weather.  I honestly wasn’t expecting 80 degrees in mid-March!  As delightful as it feels, it sets in motion some things that would not ordinarily begin until later in spring (as it is still officially winter, not even spring yet!)   For one, the bees are compelled to have a bit of spring cleaning and to begin foraging.  During the cold months, they remain hunkered down, not hibernating but limiting the the food they eat and the activity that takes place.  Once it warms up, they gear up for the high season like Alaskans preparing for the invasion of tourists.  The only problem with this now is that there is so little out there for the bees to eat.  Today, after leaving the garage door up for a couple of hours, I went back out to find that they had descended upon the empty honey supers in search of any little scrap of honey they could find.  While it’s not dangerous, per se, for them to be in the garage, it is a bit of a nuisance.  So I donned my bee suit (the white one that gets funny looks from the neighbors) and carried all the empties out of the garage.  Since I was already in the suit, I also went out to the hives and moved the entrance restricters. Here’s a shot with the restricter in place followed by one without the restricter. 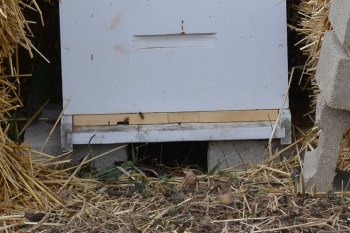 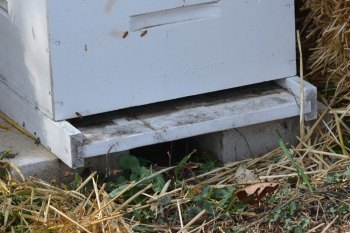 In the wintertime, we install these to make the opening to the hive smaller.  This helps keeps out rodents, makes it easier for for the bees to protect the hives, and keeps the cold out a bit.  When it’s warm out like today, it causes more of a traffic jam.  The bees were very busy, but were having to wait their turn in line to get in or out.  I took out the restricter and they said, thank you very much, and went about their business.  I also noticed several bees down at the lower entrance that were carrying out dead bees.  I take it as a good sign, it’s natural for some bees to die of throughout the seasons (in the summer alone a bee may only have a life expectancy of 6 or so weeks).  When they die in the hive, they fall to the bottom of brood box and the healthy bees carry them out.  The good sign is that there are enough healthy bees around to do this type of spring cleaning.

Another minor issue of the delightful warm weather is that it actually can get too warm in the greenhouse.  We planted several trays of spinach seeds for transplant, and they won’t germinate if the temperature is too high. According to Cornell University, spinach needs the temp to be between 40 and 75.  We are well exceeding that in the greenhouse.

Our first and second round of plant starts had a big day yesterday- moving day!  They took a short trip over to their new home in a nearby greenhouse.  It didn’t seem as though we’d planted all that much, but when gathered all in one place, 35 trays is sizable.  We have caught up with the planting, at least according to my slightly extensive calendar.  The starts took the move well, all except the tray of Toscano Kale that I turned upside down during transport.  On the bright side, it was the tray with the poorest germination so we’ll start them over during next week’s planting.  The flyboy is out earning his keep so I’m holding down the Fox Plot until he’s back.  I am hoping to put his rototilling skills to task when he’s back this weekend!

2 thoughts on “Who turned on the summer?”